Eta Carinae and the Keyhole Nebula 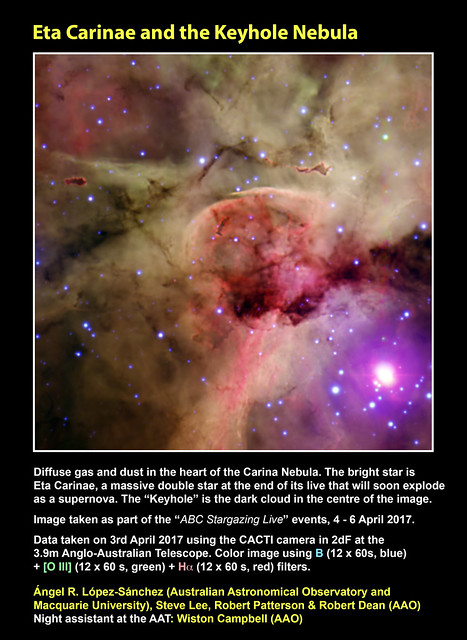 Diffuse gas and dust in the heart of the Carina Nebula. The bright star is Eta Carinae, a massive double star at the end of its live that will soon explode as a supernova. The “Keyhole” is the dark cloud in the centre of the image.

Last Thursday 24th November I conducted an outreach exercise while supporting astronomical observations at the Anglo-Australian Telescope (AAT). Using the Australian Astronomical Observatory (AAO) Twitter account I asked people to chose one of 4 given object located in the Large Magellanic Cloud (LMC) to be observed at the telescope with the new CACTI camera while we were changing gratings of the scientific instrument, the spectrograph AAOmega. I’ve called the experiment “LMC Little Gems using CACTI”.

We got 193 votes, thank you to all of you who voted and also shared the post! It was quite exciting, particularly the last 30 minutes when, thanks to some of the best science communicators in Spain (and friends), we got +50 votes!

Well, here are the results:

And the final color image of the object you chose to observe at the 3.9m Anglo-Australian Telescope is:

I’ve doing a bit of searching to get some extra information about this object. Indeed, the Large Magellanic Cloud has a high star-formation activity, meaning that star-cluster, star-forming nebula but also supernova remnants are all around the place. However, SIMBAD defines NGC 2018 as Association of Stars, and few references to this object to be a supernova remnant are found (e.g., here).

But looking at the image I can say that this definitively is a supernova remnant, yes, with an associated star cluster too (very probably, the sisters of the massive star that exploded as supernova). How? Well, do you see the filament structure seen in the green colour, that traces the [O III] emission? That is related to a supernova explosion, these features are usually not found in star-forming regions… unless you have a recent supernova explosion, as it is this case!

Thank you very much to all that participated on this outreach exercise! I really hope I can organize another experiment like this sooner than later!

Today, Thursday 24th November I’m the scheduled support astronomer at the Anglo-Australian Telescope (AAT). It is a “2dF+AAOmega service night”, meaning that I’ll be observing “service programs”, that is, science projects that require less than 6 hours in total to be completed, using the 2dF+AAOmega instruments at the 3.9m AAT.

Additionally, I’ve requested additional ~30 minutes to try to use the new CACTI camera to get a new, nice outreach image of an interesting object. As I did last May I’m asking the public to please provide feedback and help us to decide.

What do you want the AAT observes tonight?

For today’s observations I have chosen 4 objects located in the Large Magellanic Cloud (LMC),  that is why I’ve called the experiment “LMC Little Gems using CACTI”.

The chosen 4 objects are these:

I chose objects in the LMC because this region of the sky can be observed during all night this time of the year.

In addition, getting these data for outreach purposes will not interfere too much with the scientific observations, as we need to change the configuration of the instrument (the gratings of the AAOmega spectrograph) and, while the night assistant is doing that, I will be taking the data of the object chosen by the public for this outreach exercise.

So, what do you think? What do you want the AAT observes tonight?

Assuming the weather is good and we don’t have any technical problems, I should have a new, nice outreach image obtained with CACTI at the AAT by tomorrow, Friday 25th November. Stay tuned!

During this week I’m curator of the @astrotweep, a Twitter account that each week features an astronomer or planetary scientist taking about their research, science and life. I’m having a lot of fun with it, although I have to recognize it is extra work.

I chose to do it this week because there are some few things happening. In particular, I’m supporting observations at the Anglo-Australian Telescope (Siding Spring Observatory, NSW, Australia) using the 2dF / HERMES instruments. I thought it would be nice to be tweeting life how observations are doing. And that is precisely what I’ve doing today.

On top of that, “this morning” I had an idea. As we always have some “free time” at the AAT after completing the “2dF first night setup” (1) I decided to observe a nice bright deep sky object and get a nice image with the AAT. I was starting to search for a suitable target, but then I though, why don’t I ask the public what do they want to observe?

After consulting with my supervisors and getting the OK to do this, I initiated a poll in both @astrotweeps and @AAOastro asking the public to vote for one of the four following astro objects:

For around 8 hours people were casting their vote, we received 153 unique votes in total combining the @AAOastro and the @astrotweets accounts.

But surprises didn’t end here. In the afternoon, when I was starting to prepare the instruments for the night (I’m conducting observations remotely from Sydney), I explained to astronomers and technicians at the AAT what we were doing. Rob Paterson, our afternoon technician, then told me “Do you know we already have the new CCD camera installed in 2dF and just waiting for testing it?”

Let me explain why I was so excited when I heard this. For years the 2dF instrument has had an auxiliary camera, the FPI camera, that we use for properly positioning 2dF in the requested field. Rarely it has been used for science, as it is just a 516×516 pixels camera without filters. Occasionally I have also used it for getting some images of deep sky objects. But, as it has no filters, I had to get the color of the images elsewhere, usually taking archive data taken with other telescopes. But the new CCD camera in 2dF does have filters!

Rob phoned Steve Lee, the head of the Night Assistants at the AAT, and with Bob Dean the three of them managed to prepare CACTI (that is the name of the new camera) to have it ready for us.

Although there is still a lot to be done and tests to be conducted, the very first images I got this evening are quite promising. Here is the final result: 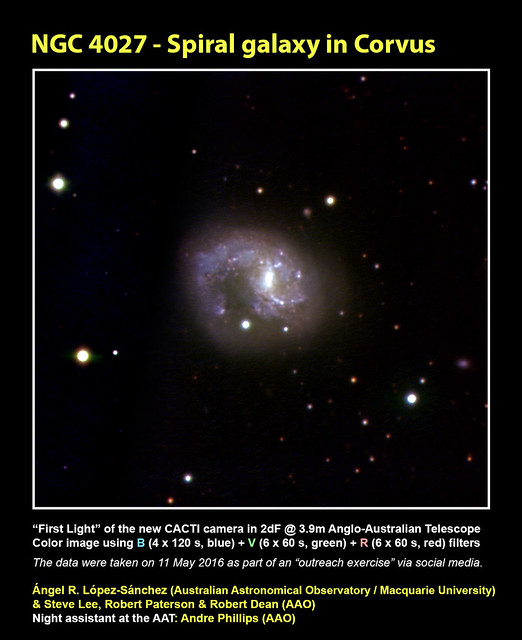 Spiral galaxy NGC 4027 located at around 75 million light years in Corvus (The Crow). This barred spiral galaxy, also identified as Arp 22, is identified as a peculiar galaxy by the extended arm, thought to be the result of a collision with another galaxy millions of years ago. This image is the “First Light” of the new CACTI camera in 2dF @ 3.9m Anglo-Australian Telescope. Color image using B (4 x 120 s, blue) + V (6 x 60 s, green) + R (6 x 60 s, red) filters. The data were taken on 11 May 2016 as part of an “outreach exercise” via social media. Click here to get a higher resolution image. Credit: Ángel R. López-Sánchez (AAO/MQ) & Steve Lee, Robert Paterson & Robert Dean (AAO). Night assistant at the AAT: Andre Phillips (AAO).

Note that this image, that actually is the “first light” of the CACTI camera, only combines 6 minutes in V and R and 8 minutes in B, that is, it is not deep at all. Furthermore not extra calibrations were taken (some flatfield images would have been nice). The deep image obtained by the 3.6m NTT telescope (ESO La Silla Observatory, Chile) provides many more details and resolution… but of course they were using the EFOSC instrument, which was specifically designed for deep imaging in optical filters. And the  image of NGC 4027 obtained by David Malin (AAO) using photographic plates at the AAT in 1982 is much more colorful.

But I still think it is a pretty result, particularly as this new image of NGC 4027 was obtained as a completely improvised “outreach exercise” using social media, in which 153 people voted for their favorite object to be observed at the 3.9m Anglo-Australian Telescope.

I really hope to repeat this exercise soon.

(1) A 2dF Plate must be configured with a scientific field, that is, allocating ~350 optical fibres to different objects in the sky. This takes ~ 20-30 minutes.

(2) Just to provide the details of the votes, see table below: