Last Thursday 24th November I conducted an outreach exercise while supporting astronomical observations at the Anglo-Australian Telescope (AAT). Using the Australian Astronomical Observatory (AAO) Twitter account I asked people to chose one of 4 given object located in the Large Magellanic Cloud (LMC) to be observed at the telescope with the new CACTI camera while we were changing gratings of the scientific instrument, the spectrograph AAOmega. I’ve called the experiment “LMC Little Gems using CACTI”.

We got 193 votes, thank you to all of you who voted and also shared the post! It was quite exciting, particularly the last 30 minutes when, thanks to some of the best science communicators in Spain (and friends), we got +50 votes!

Well, here are the results:

And the final color image of the object you chose to observe at the 3.9m Anglo-Australian Telescope is: 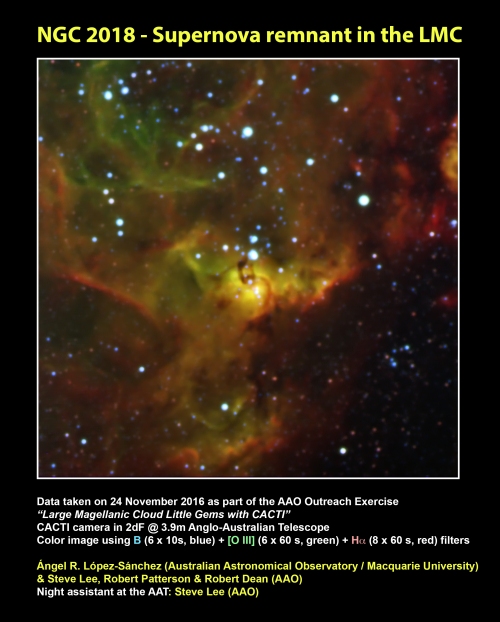 I’ve doing a bit of searching to get some extra information about this object. Indeed, the Large Magellanic Cloud has a high star-formation activity, meaning that star-cluster, star-forming nebula but also supernova remnants are all around the place. However, SIMBAD defines NGC 2018 as Association of Stars, and few references to this object to be a supernova remnant are found (e.g., here).

But looking at the image I can say that this definitively is a supernova remnant, yes, with an associated star cluster too (very probably, the sisters of the massive star that exploded as supernova). How? Well, do you see the filament structure seen in the green colour, that traces the [O III] emission? That is related to a supernova explosion, these features are usually not found in star-forming regions… unless you have a recent supernova explosion, as it is this case!

Thank you very much to all that participated on this outreach exercise! I really hope I can organize another experiment like this sooner than later!